One of the most common things people said to us when we bought the house was, “What are you guys going to do with that back room?”  They were referencing an addition to the back of the original house from probably the 60s or 70s.  They took what used to be a covered walkway connecting the kitchen to the garage and enclosed it and built it out to be a family room.  It acquired several nicknames quickly:  “the dungeon”, “the smoking room”, and “the paneling room” to name a few.  It is the largest room of the house with wood paneling walls, acoustical tile ceiling, and green mosaic linoleum flooring.  The paneling seemed to have a dark ring of smoke, nicotine, and who knows what else around the top.

A neighbor told us this is where the last owner spent most of her time because it has a ton of natural light and looks out to the side and back yards.  Besides, it has a lot of room and is right off of the kitchen and dining rooms.  Here are the before pictures:  (check out the gas log fireplace and the old gas heater in the wall)

View from corner to side door, and dining room 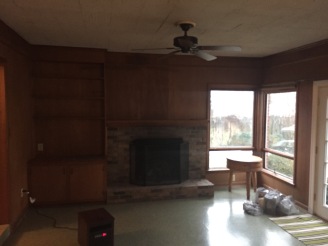 The dated paneling and scary fireplace

We knew we wanted the room to be light and airy with neutral colors.  Since the floor in this room was lower than the rest of the house, we figured we could do something interesting with the ceiling.  We wanted to have a coffered ceiling like the one in the picture here, but we needed a less expensive alternative.

We decided the alternative was to get sheets of plank board and trim it out in rectangles to get a similar look of a coffered ceiling.  We also added just a few recessed lights just because–and by “we”, we mean we came up with the design and the contractors put it up!

We had originally planned on putting the plank board right on top of the acoustical tile.  However, when the fans were taken down, we found out that there was no insulation in the ceiling!   SURPRISE!  So then the plan was changed to take down the acoustical tile, and insulate!  And FYI we did have it tested for Asbestos, and it was negative! Here’s the mess after the acoustic tiles were torn down! 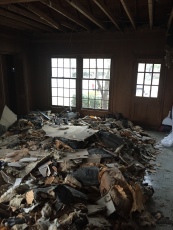 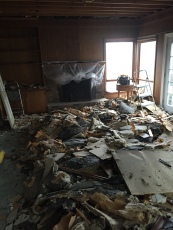 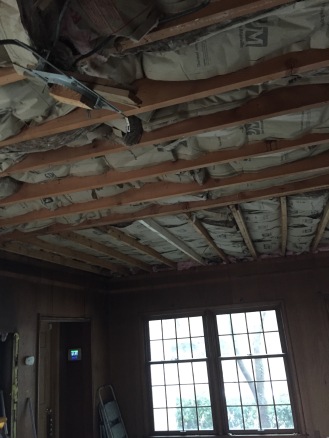 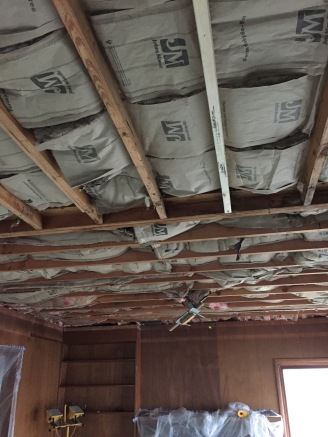 For the floor, we decided to go with charcoal gray 2’x1′ rectangular tiles in a 1/3 pattern (you may recognize these from the master bathroom) laid in the direction that would make the room feel wider.  Here was pin on Pinterest that reinforced what we wanted!

The fireplace was pretty basic with NO character so we wanted to make it more substantial since it is the focal point of the room.  This is the pin we used for inspiration!

We were originally going to tile around the fireplace insert, but we decided that with the wood trim, the granite hearth, and the ceramic floor, it would be too much!  Then we decided we would paint the brick, but once the trim and everything was in place, we liked it as is–AND that meant less painting for us!

We instinctively knew this is where we would spend most of our time as previous owners had, so we wanted to have a TV mounted above the fireplace.  Our contractors took care of placing the brackets and they also wired it to have an electrical outlet and HDMI connection (brilliant!).  Here is a look at the renovation in progress.

Start of the mantle trim with ceiling 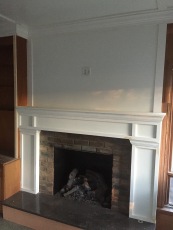 Top panel in place with trim

Before the tile went in 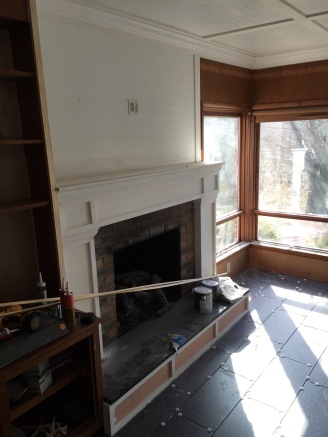 All of the sunlight – before windows were replaced.

Trim under the hearth

Crown Molding around room, and all time painted white. 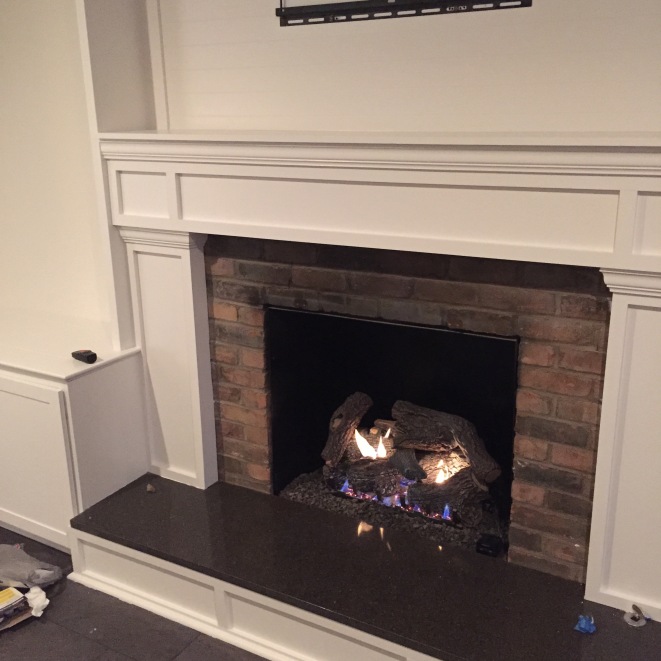 Testing out the Gas fireplace.

For the walls, we had a couple of options–keep the paneling (yuck!), paint the paneling, or replace it with drywall.  The drywall would have been the most expensive route so we looked up methods on painting wood paneling and it was a bit daunting.  We tried to sand and prime it, but the primer just scratched right off (we used Kilz 2).  We talked to an employee at Lowe’s and he directed us to a great primer to use (Zinsser Bulls Eye 1-2-3) and told us the Kilz was the worst primer they had!  Great!  No sanding was needed and this new primer went up with ease.  We painted a large section white to see how it would look.  As it turns out, we didn’t like the look at all because you could see every gap between each sheet of paneling and to fill and smooth out those places would have been extremely labor intensive!

Finally, we thought of covering the paneling with grasscloth wallpaper.  We knew we really liked the look because it was textural and neutral.  All we had to do was prime and paint the walls and the grasscloth was ready to go up.

Next we also replaced all of the windows in the room.  Two were old single pane crank windows, and the other 2 in the room were relatively “new” vinyl windows with a “wood” finish.   So we called Jon at Gilkey Windows, and he took care of us!  We can’t say enough good things about them, if you need windows, siding, gutters, etc., call Jon, he’s the best.

AND FINALLY! The room was done! Now we could move stuff back in.  Because the room is long, we divided the room into 2 areas: one facing the fire place, and one smaller area by the windows in the back of the room.  This allowed us to have plenty of space to host guests, as well as a space for the 2 of us to have as a small sitting area with a table, kind of like a breakfast nook.

Here’s the room! (As always, click any image to enlarge!) 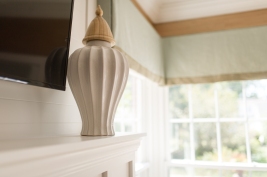 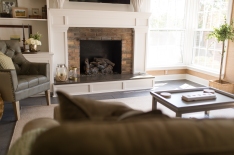 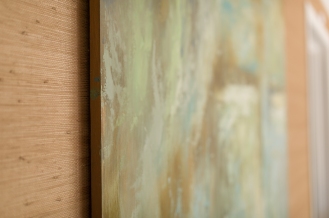 17 thoughts on “Bright and Sunny: The Sun Room”